This year’s Victorian championship was a real struggle. The field was pretty weak despite a good top prize of $1,000 – only 50 participants, of whom a mere 5 exceeded 1700 in rating. Good to see quite a few interstaters, but I don’t know why the locals are so Laodicean these days (possibly a three-day tournament is too long for some). I was expecting to be in with a very good chance of winning, but was only able to secure 5/8 on day one, 7/9 on day two and then a shocking 3/7 on day three.

You sometimes get games in which your opponent can afford to squander the gifts showered upon them, winning despite playing rather badly. I had more than a few of these across the weekend, and I must apologise to any opponents who found my demeanour less than sunny as I was repeatedly raped (also, indeed, to any who dislike the sourish tone of this blog entry). My rack synergy was generally poor, I was hampered by a dearth of blanks despite turning over more than 50%, I drew 19 Q’s in 24 games, and all the rest of it.

Somehow I was still in contention with two games to play and no serious opposition left. But here’s a screenshot of the penultimate game, which seemed fairly typical of the whole event: 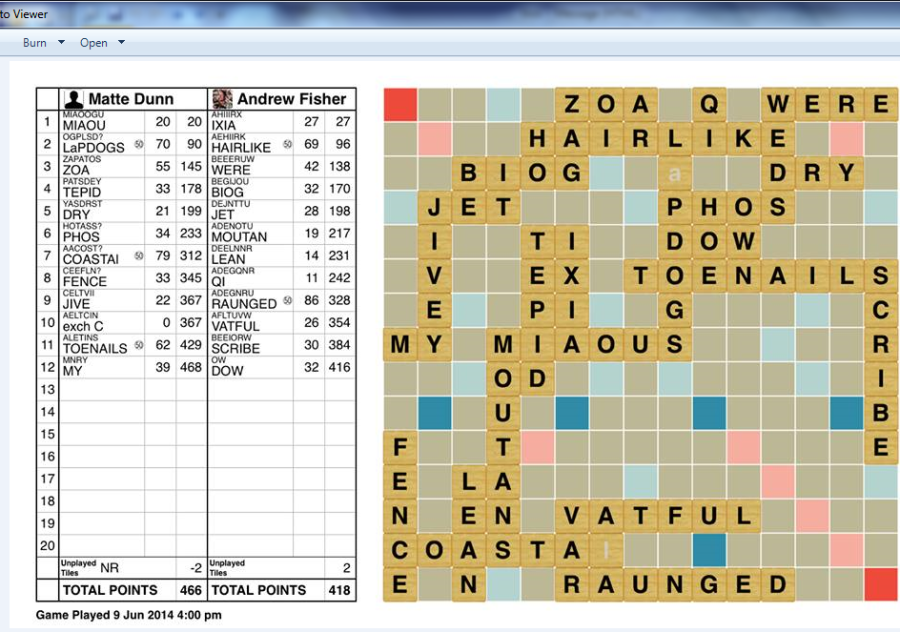 Afterwards, Matte croaked at Norma who had been annotating his racks, “What did I miss?” Looks like there were a couple of oversights – maybe LAPDOGS is marginally better than SPLODGY on move 2, but there was SPAZA for 83 on move 3, UPSTAYED for 95 on move 4, SHALOTS for 97 on move 6, LEVITIC for 68 on move 9, SLAINTE etc for 82 on move 11 (and the change on move 10 is kind of bizarre).

Then in the final game I was paired against Heather. She had crushed me on day 1 with a succession of bingos alternating with massive X or Z plays, but I still had a faint hope of salvaging a place (my win ratio against her was 15-1 prior to this event). She seemed out of sorts and unfocused, misadding the plays a few times, and on one occasion forgetting to take her new tiles out of the bag until I had replenished my rack. She then asked me to confirm the scores (at least, she barked “Score” and that is what I inferred), and when I told her what I had, she tossed her scoresheet across the board to me in disarray, showing my tally inflated by 50.

At this point she admitted that she had been drinking from a large beaker of gin and tonic (apparently an extremely strong one), not water with lemon slices as it might have seemed, and that it had affected her too quickly. She was tired, stressed, had been up all night talking to her son, had had two close endgames, and so had accepted the drink from another player who had some liquor stashed away.

We sorted out the scores and continued. I was fortunate enough to draw an S in the course of the game, permitting a late GUERITES that pulled me almost level. I then drew seven consonants, and as a final kick in the teeth did not see another vowel for the remaining three racks as Heather rolled out VITA, DONE, NOW and RAINS to vanquish me by 50.

Peter K told me that my face looked fearsome at the end of the game, and I must say I felt murderous. Scrabble is unfair by design, but this was rich, losing to somebody who was half-asleep and hardly knew where she was. But then the floodgates opened as Heather realised how she had been behaving – her face reddened with tears and she became distressed, apologetic and emotional, not just about the game but also about society’s behaviour in general.

I like Heather a lot, and she is very supportive of the gay community. News had emerged that Philip and I were now engaged, since the recent decision to allow UK same-sex marriages to take place in consulates around the world. She even became a little weepy later when I mentioned we had been together 25 years, but had not been able to do this until now – and of course still not under Australian legislation, because it is ‘not a priority’ for Tony Abbott (whereas reintroducing knights and dames was crucially important). But Heather’s inability to take the final game seriously, combined with yet another run of disastrously poor tiles for me, left a bitter taste. One wonders what the point is – though you could equally say that if you win.

I’ll close with a puzzle – I spotted two unusual bingos scoring over 70 in this position against Trevor (others are available with a lower score, e.g. URINARY and QUARRIER). Will probably put the answer in a comment at some unspecified date in the future.